Photo: Boeing will partner with FedEx Express next year as part of its ecoDemonstrator series of flight trials. (Photo Boeing)

As part of Boeing’s continuing efforts to accelerate aerospace innovation, the US manufacturer will partner with FedEx Express in the next phase of its ecoDemonstrator trials.  Starting in 2018, a 777 Freighter from the cargo airline’s fleet will be used as the platform to test emerging technologies, including both propulsion and flight deck advancements.

Mike Sinnett, Vice President of Boeing Commercial Airplanes Product Development, remarked: “The ecoDemonstrator programme is focussed on harvesting exciting technologies that will benefit our customers, the flying public and the environment.  This is the latest step in our 38-year relationship with FedEx Corp.”

David Cunningham, President & CEO, FedEx Express added: “FedEx is committed to developing and implementing innovative solutions that connect the world responsibly and resourcefully.  We are proud to be working with Boeing and use our 777F to play a key role in bringing future benefits to the entire aviation industry.” 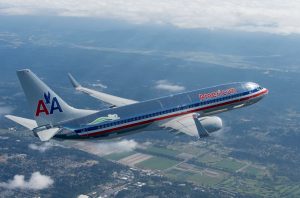 This will be the fifth in the series of ecoDemonstrator flights that Boeing says are designed to improve the environmental impact and safety of future airliners.  The series started in 2012 using an American Airlines Next-Generation 737-800 and was followed two years later by company-owned 787-8 Dreamliner, N7874 (c/n 40693), which carried out more than 25 different trials.  In 2015, in collaboration with the TUI Group and NASA, Boeing used 757-222, N757ET (c/n 24627), to look at, amongst other things, improving laminar flow, insect resistant coatings and solar and thermal energy collecting systems.  Last year, in a first for the programme, Boeing partnered with Embraer and used one of the Brazilian manufacturer’s E170 jets for testing light detection and ranging (LIDAR) – measuring distances using pulsed laser light – as well as Brazilian-sourced biofuels. 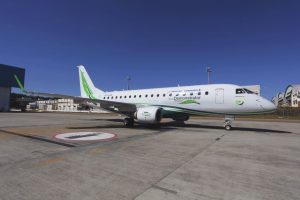 Last year, in a first for the programme, Boeing partnered with Embraer and used one of the Brazilian manufacturer’s E170 jets. (Photo Boeing)

According to Boeing the flight testing schedule for 2018 will take approximately three months to complete and will include: installing a compact thrust reverser developed by its engineers that is designed to save fuel, flight deck improvements that will help to ensure more efficient operations at busy airports as well as flying prototype components that use cutting-edge manufacturing techniques that reduce material wastage.  After the ecoDemonstrator flights are complete the freighter will be returned to FedEx Express’ fleet.