Photo: The new Pier G is part of a wider-reaching expansion that includes the contruction of Terminal 3. (Fraport)

Fraport has applied for permission to construct a new low-cost pier at Frankfurt Airport.  The first phase of Pier G, which will be designed specifically for no-frills carriers, is expected to open in 2020 and will initially accommodate up to five million passengers a year.

The first phase of the new Pier G will be completed next year. (Fraport)

The facility will be incorporated as part of the new Terminal 3 under construction on the south side of the airfield.  But while it was originally intended to be included under phase two of the project, airport operator Fraport has accelerated the process to meet growing demand from LCCs flying into the German hub. 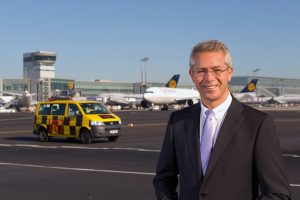 “Submitting the building permit application for the new Pier G is an important step that will enable us to alleviate future capacity constraints at Terminals 1 and 2 as early as 2020,” Dr Stefan Schulte, chairman of Fraport’s executive board explained.  “By this date, our two existing terminals are expected to be approaching their capacity limit of 64 million passengers.  That limit could be expanded to around 68 million passengers, but only on a temporary basis and at the expense of quality.  Pier G was already envisaged as the second phase in the construction of our new Terminal 3 and is now being built ahead of schedule.  The new pier is designed as a fully functional passenger terminal tailored specifically to the needs of low-cost carriers and will be optimally integrated into Frankfurt Airport’s hub system.”

With T3 not due to open until 2023, initial services from Pier G will be connected via bus shuttles from T1 and T2 on the northern side of the airport.  Phase two of the project will see the pier connected to T3 and expanded to boost annual passenger capacity up to seven million, while the third and final phase will include a further extension and the introduction of bridges and jetways.

Schulte added: “Frankfurt is, and will remain, a hub airport.  However, the development of the aviation market as a whole means that, in addition to the traditional full-service offering that many airlines expect from us, we have to take the needs of low-cost providers into account and continuously enhance our processes.  From our talks with low-cost providers we know that short turnaround times are a particular priority for the LCC sector.  However, it is equally important for us to expand our services in our core business with network carriers so that we can continue to offer them a premium product also in the future.  Hence, the first construction phase of Terminal 3 – consisting of Piers H and J and designed to provide capacity for 14 million passengers – remains unchanged and is proceeding as planned.  T3 will serve as a new hallmark for Frankfurt Airport as an international aviation gateway.  Thanks to the parallel planning and realisation of Pier G and Terminal 3, we will maintain the necessary flexibility to offer ideal business conditions for all aviation segments in the future so that we can continue to grow together and operate profitably here in Frankfurt.”

Fraport said Frankfurt will continue to serve as a hub airport. (Fraport)