Photo: The A340-laminar-flow-BLADE-demonstrator-made its first-flight on September 26. (Photo Airbus)

Airbus has conducted the maiden flight of its Breakthrough Laminar Aircraft Demonstrator in Europe (BLADE) project.  Under the European Union sponsored Clean Sky BLADE programme it is assessing the feasibility of introducing laminar-flow technology to commercial aviation, helping to improve aviation’s ecological footprint, by bringing a 50% reduction in wing friction and up to 5% lower CO2 emissions. 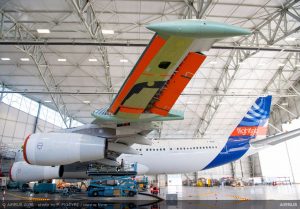 To measure the laminar wings’ performance, Airbus has modified the prototype A340-300, F-WWAI (c/n 001), with two representative transonic laminar outer-wings.  The aircraft, dubbed Flight Lab, took off from Tarbes airfield in southern France on September 26 and after a series of successful tests landed back at Airbus’ Toulouse/Blagnac facility after being airborne for 3hrs 38mins.  The extensive modifications to the A340-300, included its outer wings and fitting a highly complex flight-test-instrumentation station in the cabin.  The alterations took 16 months to complete at Tarbes and involved support from numerous industrial partners across Europe.

The wings have been fitted with hundreds of sensors to help engineers determine how stresses and strains during flight influence the laminarity – the first time it has used such a testing method.  Other ‘firsts’ are the use of infrared cameras inside a pod to measure wing temperatures and an acoustic generator that assess the influence of acoustics on laminarity.  There is also an innovative reflectometry system, which evaluates overall deformation in real-time during the flight.

A key goal of the BLADE test is to be able to calculate the tolerances and imperfections that can be present without affecting laminarity.  To this end, Airbus will simulate every type of imperfection in a controlled manner, so that at the end of the flight test programme the tolerances for building a laminar wing will be fully known.  The manufacture says the Flight Lab will perform around 150 flight hours over the coming months.