Photo: The first Boeing 737 MAX 7 made its debut at the company's Renton factory on February 5. (Photo Craig Larsen/PRNewsfoto/Boeing)

Boeing marked another development milestone in its long history with the roll out of the first 737 MAX 7 at the company’s Renton, Washington facility on February 5. 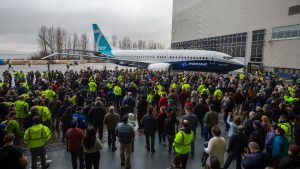 Boeing workers and guests watch as the first 737 MAX 7 is rolled out at Renton. (Photo Boeing)

The aircraft will now undergo systems checks, fuelling and engine runs on the flight line at Renton before making its maiden flight in the coming weeks.  A second aircraft will join the flight development and certification programme, with approval for service entry expected before the end of the year.  The 737 MAX 7 is due to be delivered to launch customer Southwest Airlines early in 2019.

Keith Leverkuhn, Vice President and General Manager of the 737 MAX Program, commented: “For our airline customers serving airports at high altitudes or remote locations, the MAX 7 is the ideal complement to their fleet.  We look forward to demonstrating the incredible flexibility and range of this aeroplane.  This is the third new 737 MAX variant that our team has introduced in just three years.  That is a phenomenal accomplishment and a testament to the dedication of the entire 737 team.” 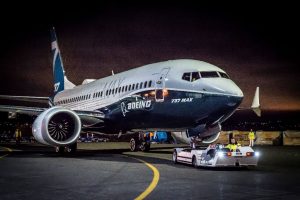 The first 737 MAX is moved from the painte hangar ready for its debut. (Photo Boeing)

The 737 MAX is the fastest-selling aircraft in Boeing’s history, accumulating more than 4,300 orders from 92 customers worldwide, although the MAX 7 has only 65 firm commitments, from Southwest Airlines (30), WestJet (25), Canadian start-up Jetlines (5) and Air Lease Corporation (5).