The initial deal, which is valued at $2.82bn, also includes purchase rights for an additional ten aircraft.  Under the terms of the agreement being negotiated, Hawaiian will also acquire several new aircraft transition support packages from Boeing Global Services. These include training and initial provisioning to ensure a successful and on-time entry into service.

Peter Ingram, the airline’s President and CEO, remarked: “The Dreamliner combines excellent comfort for our guests with fantastic operational performance and will allow us to continue modernising our fleet into the next decade.  The 787-9 offers more seating capacity than our current widebody fleet, which will allow us to further build on our long-haul service to Asia as well as to North American destinations. 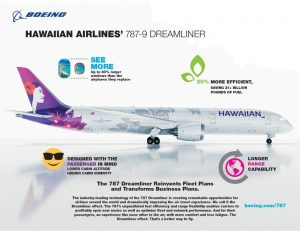 Some of the features of the Boeing 787-9 that Hawaiian Airlines will benefit from. (Photo Boeing)

News of the deal will come as a huge blow to Airbus, especially as Hawaiian confirmed a week earlier that it had cancelled an order for six A330-800s.  Ingram confirmed the airline had carried out a competitive bid process that pitched the 787-9 against the European manufacturer’s A330-900.

“We were in the enviable position of choosing between two outstanding models for our flagship aircraft of the future, and I couldn’t be more excited about the prospect of adding the Dreamliner to Hawaiian’s fleet,” he added.

The airline says it expects to finalise binding purchase agreements with Boeing and GE during the second quarter of this year, with first deliveries set to start in early 2021.