Photo: Thousands of Boeing employees at Renton celebrate the 10,000th 737 to come off the production line. (Photo Boeing)

Boeing has been recognised by Guinness World Records following the roll-out of the 10,000th 737 at its Renton final assembly facility.
The milestone aircraft, a 737 MAX 8, N8717M (c/n 42571), is destined to join Southwest Airlines. The 737 has once again broken the category for the most produced commercial jet aircraft model having previously held the record in 2006 when the company rolled out the 5,000th example, a landmark that took almost four decades to reach. However, with unprecedented demand for single-aisle airliners and higher production rates, it has taken just 12 more years for the programme to reach this significant landmark. 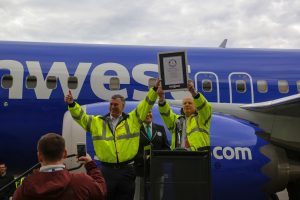 The 737 has once again broken the category for the most produced commercial jet aircraft model having previously held the record in 2006 when the company rolled out the 5,000th example. (Photo Boeing)

Kevin McAllister, Boeing Commercial Airplanes President and CEO, observed: “This incredible milestone is a testament to the work we do every day to build the most reliable and efficient single-aisle aeroplane in the world. It represents more than 50 years of success and achievement on the part of thousands of Boeing employees past and present, our supplier partners and our airline customers around the globe who put their confidence in the 737.”
Boeing says the 737 programme is set to continue breaking records with production planned to increase later this year from the current rate of 46 aircraft per month to 52. There are more than 4,600 737s still on order fuelled by sales of the newest variant, the 737 MAX.